I Went to Talk to a Man About a Horse Again

Six months ago I was given a wonderful opportunity. I was asked to try and use my skill set as a radiation oncologist to come and perform a radiation implant on a horse with an orbital tumor called a malignant peripheral nerve sheath tumor. That may sound bad, but these tumors tend to grow slowly and rarely spread. That procedure was easy to be honest. It was eloquent in that the horse was asleep, there was hardly any bleeding, and we were done in no time at all. That implant worked as the tumor seems to have regressed and the horse is back competing in saddlebred competitions – and winning by the way!

Last week, I was invited again to come to the horse hospital to evaluate another horse. I was very much impressed and excited when this time I received the phone call by the lead surgeon. I jetted over to evaluate the horse during lunchtime, and together with the veterinarian, we examined the 2 year old filly. This horse was very different from the one before. For starters, this was a thoroughbred, and one with high hopes for a successful racing career. But also, the tumor this time is something called a Rhabdomyosarcoma, it was in the bladder, and had already spread to at least one other place. In comparison to before, this is a fast growing, fast spreading kind of cancer – not the same animal as before, both literally and figuratively.

We performed a cystoscopy which involves using a scope to look through the bladder. I also performed a physical exam, which much to my amazement, I could put my whole hand into the bladder and feel the tumor… I just couldn’t see it with my own eyes. The surgeon had previously attempted to remove both the tumor in the bladder as well as the one in the side wall of the urethra a couple of inches away. Both were unfortunately growing back, and it had only been about 2 weeks.

I discussed the options for treatment of this horse. There is not a good chemotherapy regimen for these cancers in horses. Radiation works very well for rhabdo’s in humans, and based on the location of the tumor, whether we performed radiation or not, if it grew – it would very likely block the bladder from emptying. I spoke with the owner and the trainer, who both agreed for me to try and give the horse the best chance. I quickly went to work trying to get the necessary permits from the state and ordering the radioactive sources.

We were able to complete the entire process and have me back at the horse hospital 1 week later, which was this past Friday, and I performed my second implant on a horse. [quote align=”center” color=”#COLOR_CODE”]For the record, this was the second implant ever of its kind in a horse – and I now get to claim that I performed both of them![/quote]

I assembled my team from UK and we headed over to the horse hospital and met with the lead surgeon in the procedure room. The horse was brought in as I was setting up my table.

A few key differences between this case and the last: the horse remained awake today… she was just heavily sedated with an epidural. The reason we did not anesthetize the horse was because if she was under anesthesia and positioned on her side, I would never have been able to get my hand back in the bladder (a few hundred pounds of horse would be pushing down on me). Second, I was clearly working at the business end this time around (more on that later) rather than the eye which required minimal prep or spillage of fluids, and third, this procedure took nearly 3 hours, much longer than before.

As we were prepping the horse and I was just about the begin, I am told, “Just to let you know, when a horse has an epidural, they tend to pee a lot.” I was also handed these clear plastic bags shaped like stockings to cover my shoes with. The lead surgeon didn’t have a pair on so I didn’t really use them. I should have.

I should have also paid more attention to his statement about the pee because we made it about 5 minutes into the case until I got my first taste of things to come. As I had my hand in the horses bladder, determining the borders of the tumor and planning my needle placement, the horse starts throwing a series of pelvic thrusts that literally took everything I could to hold my hand in place. Then came the pee. Fortunately, I successfully got my head out of the way during the first and every subsequent attempt, but my body certainly received the brunt of it. I bet over the course of 3 hours, I took a solid 10-15 gallons of urine to the chest and legs. [With a rather sarcastic tone] “It was Awesome.” The only upside, was we did manage to get through the case without any poo. Its the little victories that count.

The bigger problem that I ran into though, was that I had originally planned to perform the entire case using empty needles, with intentions that I would place first and then insert the radiation strands through those needles, unsheathing them in the last step. This conceptually was going to work out great. However, in the process of trying to place the first set of needles, I realized the cystoscope was just not going to be able to effectively help me guide them in (too much equipment in such a small space). Then, after I positioned my first set of 8 needles through the tumor and the bladder base purely by feel, I turned my attention to removing the stylettes in preparation of inserting radiation sources. That’s when the pelvic thrusts returned and the horse literally pushed all 8 needles out. I replaced all the needles, but this time I kept my hand in to hold everything in place. I felt very fortunate because this visit to the horse hospital, I brought my boss and mentor along with me (because he wanted to watch), but I ended up putting him to work as we quite literally needed 2 sets of hands. He began exchanging the radiation sources while I held the needles in place, which is when he hit another set-back.

We had a very difficult time inserting the radiation sources into the needles, a few broke, & some didn’t exactly unsheath as expected. In the end, I had to removed the needles, load them hot, and insert them manually. This works fine, but the downside is I likely received a fairly high dose of radiation to my left hand. I guess we will see in about 10 or more years if that amounts to anything.

All in all, that main portion of our procedure took about 2 hours, and then I was able to quickly finish up implanting the second tumor in the urethra as this one was much closer to the entrance and could be seen without the assistance of a scope. I implanted this tumor with 24 free seeds, which took about 15-20 minutes. Fortunately, right as I was finishing this segment, the Vet reminded me of how cooperative the horse had been largely because, despite the voluminous amounts of urine she had dumped on me, there was no poo! yet! He also pointed out that it was likely coming in the near future if we didn’t wrap up soon. I was done in about 10 minutes.

We finished the entire procedure just before 5 o’clock. We packed up all of our equipment, took it out to my car, and in the process the horse was brought back to the recovery stall. We shook hands with the veterinarian and his staff and left. As we were driving back to UK, my wife actually texted me asking if I wanted to go out for dinner. I told her I was in no shape to be presentable in public. In all honesty, I was absolutely exhausted. The vet warned me that when I get home the only person who would be happy to see me would be the dog. He was right. The second I entered the house, Shannon took one whiff of me and sent me to the shower, but my dog Bodhi – he was thrilled. He sniffed and wallered over my legs and scrubs like it was his job. Dogs like the smell of pee for some reason.

I always like to know that I tried and performed the best radiation procedure that I could. This implant was without a doubt the most difficult one I have done before, and I truly hope that this will be successful. Unfortunately, this is an aggressive cancer so time will only tell. We have scheduled for the horse to be re-evaluated in a week. I’m not sure if I can be there for that second look, but the surgeon will keep me informed and likely send me pictures from the procedure. Other than that, now begins the waiting game. 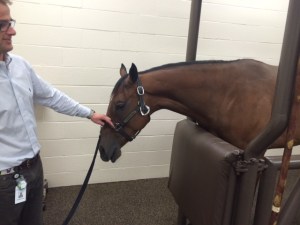 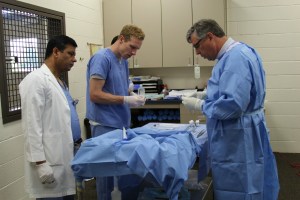 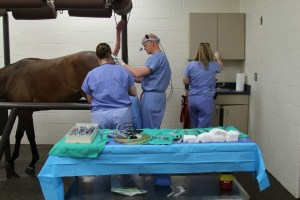 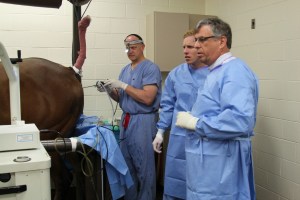 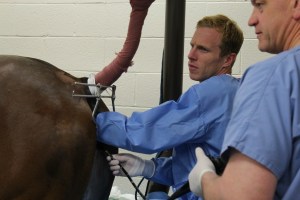 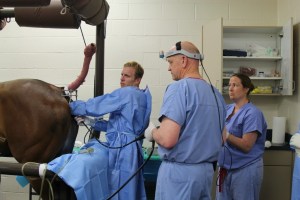 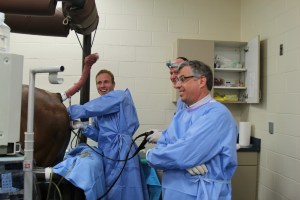 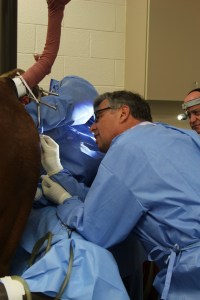 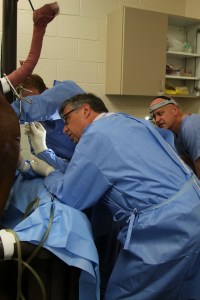 Sleeping in the Clouds